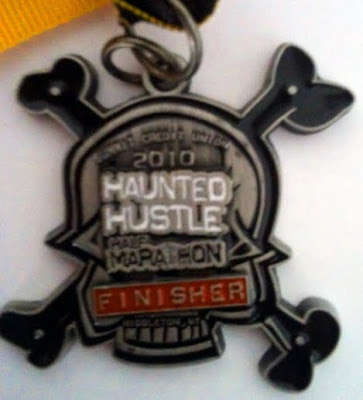 I am pleased to report that this one deserves a race report. It was no PR, but by far my strongest race since Chicago 2009. And boy did I need it. After 3 miserable half marathons this year, a sub-par Boston and a decision to bag the Chicago marathon, training has been mentally tough to say the least.

After I made the final decision to bail on Chicago, I decided to give myself some much needed rest after 5 years of nearly continuous, intense marathon training. So I have been running when it works and resting when it works. The last 2 weeks I started getting worried though, as I hadn't run a long run in weeks. In fact, that last long run had been the Naperville Half death march. So I logged 13 2 weeks ago and 15 last weekend. Thanks to heavy winds this week, I only ran once during the week. I did 7 with 2 at half marathon pace. Those miles were 7:42 and 7:37, and felt WAY harder than half marathon pace. So I set my goal for today's half to be at or under 1:45, which is right on an 8:00/mile pace.

This year was the first inuagural Haunted Hustle Marathon, Half Marathon and 10K. I was concerned about parking and the start, so I went in a back way, filled the car with gas and used the restroom before I finally parked. I found parking in the host hotel, ran a mile warmup. As I headed to the start area, I ran into some good friends, which was awesome. We all hung out at the start and waited for the gun to go off. There were no pace group signs, so I just lined about about 75 feet back. The start was pretty cool as a big fire engine was there honking its horn and people were screaming. The weather was absolutely perfect (low 40s and overcast). I took the first few miles easy, paying close attention to my breathing and how I felt. Fortunately, I felt good! At mile 4.5, I ran into my friend and a bunch of girls (2 of which were my GOTR girls in the Spring), I got big cheers and a high 5, which was fun. Around mile 6, I realized I felt really great and was way past the point where I fell apart at Naperville. I made a goal to hold pace and pick it up at 10. But sure enough, I started to gradually pick it up. I was reeling people in and making moves to pass them. It felt great and I felt strong. I could tell I had picked up the pace and knew that while I was not going to be in PR distance, I could negative split the race and do WAY better than my 1:45 goal. The miles clicked off nicely and I never felt a point where I had to slow pace or fall off. WOO HOO! Overall, the course was rolling, but not too hard. The uphills and downhills were enough to keep it interesting, but nothing too difficult.

The last mile was into a decent headwind, but it was almost the same route I ran a 5K on last weekend (with the same wind). Just before the finish, we punched up a hill, turned L and then had a nice fast downhill to the finish line! The clock read just over 1:40. Sweet. Even better, I looked at my Garmin and saw 1:39:48 - even better!

I saw both of my friends finish and a lot of other buddies out there. It was awesome and I was so excited to finally have a nice strong race. I checked the posted results and saw I came in 1st for my AG too! Sweet!

Interestingly, I saw someone post something on Facebook recently on how Garmins/GPSes are off. I have always known that, and after reading the article considered leaving mine at home. I am so glad I didn't! The mile 5 marker was around 4.6 and most of them were .2 off after that. It was comforting knowing I was NOT going way too fast (as I would have thought of had I relied on the mile markers!).

Wow!!! You rocked it. Congrats mindi. And such a big negative split. So what's next?

Congratulations Mindi!! I am so happy to see you busting out a strong race after all the let-downs you've had. I think it goes to show how our bodies need a break after a while. (I am totally looking forward to mine!) And then you bounce back even stronger. Great job.

congratulations! Great job -- you're such a strong runner. I agree, the race was awesome -- especially for it being the first year. The turnout was great and the weather rocked.

Smart pacing strategy!! Soooo glad you had such a positive experience too, a perfect reward for both your hard training and hitting the reset button!

Congrats on a great run. I ran the full and the weather sure did cooperate for us, except for a few windy parts. I liked the race and thought they did a good job except for the mile markers. they were way off frequently on the full as well (Mile 11 was at 11.3).

The latest in my running....